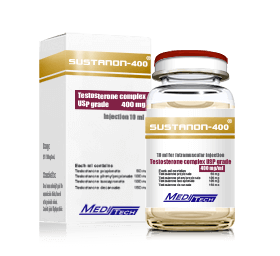 Super Test 400 – Is it just a classic Testosterone or not?

The “400” comes from the fact that the steroid contains 400mg of each hormone per millimeter of steroid.

Typically there is less testosterone propionate and equal parts of the other two testosterone forms used in the mix.

The steroid can be uncomfortable to inject due to the high amount of testosterone, so some people choose to dissolve it in oil-based products and take it that way.

Super Test 400 works with free testosterone in the bloodstream to boost muscle growth, weight, and appetite. The steroid is anabolic and androgenic in nature. You can expect to get a significant improvement to strength and muscle mass within a few weeks.

Super Test 400 can also increase libido and aggression, as well as an overall better sense of well-being.

Standard Super Test 400 doses for men are 400mg per week, but experts can take up to 1,00mg twice per week for maximum results.

Testosterone levels will be at the max for around a day, with the steroid fading completely over two weeks. When using Super Test 400 as part of a cycle, be sure to cycle off for four weeks at a time to prevent the estrogenic effects of taking steroids.

Women should avoid this steroid, as well as any other testosterone-based steroids.

Super Test 400 For Cutting and Bulking

Super Test 400 can be used as part of cutting or bulking cycle.

For bulking cycles, it is recommended that you take Super Test 400 alongside another steroid such as Boldenone or Deca Durabolin. Super Test should be used for 8 to 12 weeks and should be taken after using another anabolic steroid for 4 to 6 weeks.

Combine Super Test with Parabolan, Trenbolone, or another similar steroid for the cutting cycle. Take care to avoid using the same injection site to prevent muscle damage and pain.

Take care when using Super Test 400 and supplement usage with other steroids and supplements to prevent side effects and lasting damage.

Is it something special? I would say NO. It’s basically Testosterone just in the higher dosage.